Softball was a game-changer for Davies’ Kent

When she arrived at Davies Career and Technical High School as a freshman, Kent was like most ninth graders. She was quiet, reserved and lacked confidence, especially on the field. She had played softball since she was 5 years old and showed plenty of promise but never felt comfortable on the field.

“When I started out, I had coaches who doubted me, but now I’m here,” she says. “I can show them ’look at the player I have become.’ ” The more she played under Bob Morris and his staff at Davies, the more her confidence grew. She went from thinking she wasn’t going to make the team to starting as a freshman, getting to the Division III title game as a sophomore, finding ways to have fun as a junior and now learning how to cope with having her final season taken away from her by the coronavirus pandemic.

“This was supposed to be my last bang at softball. I was going to leave it all out on the field this year,” Kent says. “I was ready to leave my name on Davies for softball and wasn’t able to do that now.”

The ninth-grade Kent would never have believed she would not only make the team but would be named captain by the time she was a junior.

The reality of Kent’s situation, unbeknownst to her, was there was no way she was getting cut. Davies doesn’t have a junior varsity program or the numbers to allow cuts. If you want to play, the Patriots will find room for you.

Being a part of the program as a ninth grader was a big deal to Kent and helped her grow as a high school student.

“Softball made me new friends. It made me reach out to people,” she says. “If I was having a bad day where life wasn’t going so great, I knew I had softball and I knew I could play and get my mind off everything. It was a good escape from reality.”

In her sophomore season, Kent and the Patriots went 9-4 in the regular season, then tore through the playoffs to make the D-III finals. While they were swept by Tiverton, just getting there meant the world to Kent.

“It showed, although Davies isn’t known for softball, we can do good if we put our minds to it,” Kent says. “We were playing 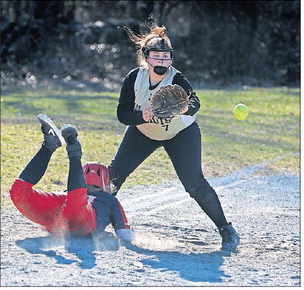 at [Rhode Island College] and all the girls were so excited. It’s one of my best memories playing softball.”

Davies moved up to Division II last spring and Kent was named captain. It was a role she didn’t take lightly. Kent became a team leader, helping new faces adjust to life as a high school athlete the way older players had helped her two years earlier.

Wins were a little tougher to come by in D-II as the Patriots went 3-13. But Kent didn’t let that stop her — or her teammates — from enjoying the season.

“Even if we knew we weren’t going to win the game, we still had to play hard because you never know what’s going to happen,” Kent says. “The main part was still having fun, win or lose, and have fun as a team because that’s what you’re playing the sport for.”

Kent and the Patriots were ready to roll this spring. With limited numbers, tryouts were quick, so the team was ready to get started. A few days later, COVID-19 hit. Once the announcement came that students would miss two weeks of school, Kent had a bad feeling about where the season was headed. She ended up, unfortunately, being right.

But as Kent prepares to graduate, she hasn’t let this spring define who she is as a student-athlete. She chooses to remember the good — getting to the finals, being named a two-time captain, earning All-Division honors — instead of what this spring has brought.

She leaves with confidence, ready to take on the challenge of playing softball at CCRI. Freshman year of college won’t be like freshman year of high school because, thanks to her time at Davies, she’s discovered a lot about herself.

“The confidence I gained from the field — I’m going to carry that off the field,” Kent says. “If I think I’m not good at something, I’ll remember I didn’t think I was good at softball and I’ve done this. Now I can go and be the best I can be because of what I’ve done in softball.” erueb@providencejournal. com (401) 277-7264 On Twitter: @EricRueb