State House protest to urge reopening of economy is ‘selfish,' she says, as death toll rises to 215

PROVIDENCE — Gov. Gina Raimondo commiserated Saturday with the “frustration” that drew as many as 100 protesters to the State House with signs telling her to “Knock It Off Gina” and “Reopen the Rhode Island Economy.”

But she also told them their actions threaten to “wreck it for the rest of Rhode Island.“ At her daily briefing on the pandemic, she said: “I certainly

respect their opinion and their ability to protest. ... [But] if they are violating social-distancing rules, then they should knock it off.”

“It’s not helpful. It’s not healthy and it’s putting them at risk and their families at risk and, at this point, to violate social-distancing rules, it’s just selfish,'’ she said.

“Look around; 180,000 people have filed unemployment insurance claims. We report on mortality every day. Rhode Islanders are struggling. It is not a time to be selfish,” she said.

And “I can tell you this,’’ she said. “If everybody today went out and violated the rules, I will definitely have to push back the date at which we can reopen the economy. This is just a fact. ... We know with certainty that when mobility increases, there’s more cases.”

Raimondo was responding to reporter questions on a day when the state Department of Health announced 13 additional deaths attributed to the coronavirus and 430 more positive cases.

That brings the total toll in the state to 215 deaths and 7,129 cases. It was the third day in a row that Rhode Island saw more than 400 new positive tests. Thursday saw 418 and Friday saw 437 new cases per day.

There were 263 people in the hospital from coronavirus, 77 in intensive care and 52 on ventilators.

As Raimondo viewed the numbers, she said they contained some “good news.”

“I can’t wait for the day when we start to see a decline,” she said, ”but the fact that we are plateauing and holding steady on cases and hospitalizations is testament ... to your obeying of the stay-at-home order.”

Raimondo began her 1 p.m. news briefing by asking artists throughout the state to share their work online using the hashtag #RIArts.

She also launched a website, RIarts.org, to help connect artists around the state with benefits and other opportunities. This website is a partnership with the Rhode Island State Council on the Arts.

She also announced that famed artist Shepard Fairey has created an original work for Rhode Island. “It’s a show of strength and reliance,” said the governor.

Promising more information on Monday about how and when shuttered businesses will be allowed to reopen, she said, the timing will be guided by a “combination of factors that tell us: have we passed our peak and are we beginning to see a decline or at least a longterm plateau.”

On the state budget

Raimondo said her focus the next four weeks is “fighting the crisis,” but then — with more information in hand on how much aid is coming from Congress — she will focus on the state budget. “Everything is on the table,” she said. “It’s going to be a brutal budget to balance.”

“We may get to a point where layoffs and furloughs are inevitable. In fact, that is obviously probable in light of what our deficit is going to look like,” she said. ”But the last thing I want to do is to contribute to the state’s unemployment problem and to lay people off.”

Instead, she said, she is “redeploying as many people as possible” to jobs where they are most needed now, such as contact tracing.

Raimondo also talked about the statistics on the number of positive coronavirus cases in the Latino community, most recently pegged at 45% of the total.

This Tuesday, she said she plans to hold a Facebook town hall in Spanish to help answer questions and spread awareness. The event will begin at 7 p.m.

She also took time to remind everyone watching that the stay-at-home order was still in effect. She noted, “These past few days, we’ve seen glimmers of hope. Don’t blow it this weekend.”

Health Department Director Dr. Nicole Alexander-Scott, began her time at the podium asking Rhode Islanders to maintain social-distancing efforts and reminding them to also be aware of ticks as the weather begins to turn warmer.

She said that Rhode Island did more than 3,600 tests for COVID-19 yesterday.

Of the 13 newly reported deaths in Rhode Island, the Health Department said 10 were connected with nursing homes.

More specifically, there was one death each at the Darlington Memory Lane, Charlesgate Nursing Center, Brentwood, Orchard View Manor and Mount St. Rita nursing homes; three at Stillwater Assisted Living & Skilled Nursing, and two at the West Shore Health Center, according to the Health Department.

As of now, 165 of the 215 COVID-19 related deaths have been in nursing homes. The number rises to 170 when deaths in other “congregate care” settings such as group homes are included.

There are roughly 1,400 cases associated with longterm care facilities: roughly 985 residents and 415 staff.

Scott also encouraged Rhode Islanders to keep up with routine healthcare needs. She noted that March’s data around vaccinations is down across the state: down 23% compared with a year ago for polio, 42% for the human papillomavirus and 12% for hepatitis B, but up 5% for flu vaccinations. 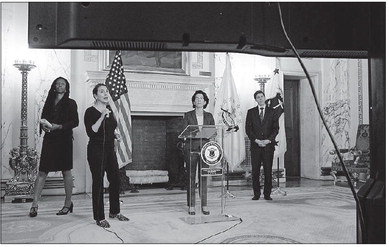