In a letter to the senators on Wednesday morning, Senate President Dominick Ruggerio cited Attorney General Peter Neronha’s intervention on Monday in the case known as Champlin’s Realty Associates v. the Coastal Resources Management Council (CRMC) that is pending before the R.I. Supreme Court. In his email to colleagues explaining why he was pulling the three names from Wednesday’s Senate calendar,

Ruggerio wrote: “The attorney general raised concerns regarding a closed-door mediation between the CRMC and Champlin’s that would allow for a marina expansion.” “He asserted that the settlement agreement recently presented to the court for approval was formed outside of the public regulatory process and does not account for the factual findings that formed the basis for the CRMC’s 2011 decision denying Champlin’s application to expand.”

“In light of the significance of the public process concerns raised by the attorney general, we will not be considering advice and consent of the three reappointments to the CRMC currently on Wednesday’s calendar. Rather, I will direct that these nominations be placed on the desk.” Ruggerio’s decision placed on indefinite hold Raimondo’s reappointment to the CRMC of: Jennifer R. Cervenka, chair; Raymond Coia, vice chair, and Donald Gomez.

“Specifically, the attorney general’s office cited the following concerns,” Ruggerio wrote: “The CRMC negotiated the memorandum of understanding (MOU) without jurisdiction to do so; “The MOU was created without following the CRMC’s regulations and procedures or provisions; “The MOU does not comply with the Administrative Procedures Act because it does not contain findings of fact to explain or support its new position with regard to the marina expansion; and “The settlement process failed to comply with the steps the court required the CRMC to follow when considering a new plan.” Neronha’s announcement came the day after the Providence Sunday Journal published a Hummel Report investigation that detailed a 17year effort by the owners of Champlin’s Marina to expand dock space and boat capacity into Great Salt Pond. The investigation showed that the CRMC met with Champlin’s attorney, Robert Goldberg, and retired Supreme Court Chief Justice Frank J. Williams in December to hammer out a settlement that was a scaled-down version of the original 2003 proposal.

They left opponents of the project out of the process after a lawyer for the CRMC said the agency would not go forward without their participation. And they approved the settlement at a virtual meeting between Christmas and New Year’s with no notice to the opponents that an agreement had been reached. 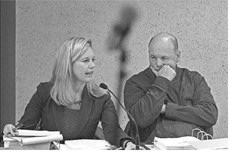