PROVIDENCE — It has been a summer of historic protest activity, and for some Rhode Islanders, like 15-year-old Ella Kulper, it’s been part of the high school experience.

Kulper, a sophomore at The Wheeler School, was among a small group of teenagers who staged their own event in support of Black Lives Matter on Saturday, mustering in Burnside Park and marching to the terrace in front of the State House.

There, they heard from a local teacher who went to the same Illinois high school as Jacob Blake’s father and was in the same graduating class as the young man’s uncle. Blake, who is Black, was partly paralyzed when he was shot seven times in the back by police in Kenosha, Wisconsin, on Aug. 23.

“It’s my sincere hope that 33 years after you graduate that you won’t be gathering to support one of your classmates to defend their character and the character of their nephew,” said the teacher, Kristin Murphy, of Providence.

The protest on Saturday, which drew about 25 people, including at least 10 adults, to the State House, gave Kulper and other young people an opportunity to be a part of the mass movement that has agitated for police reform for months now.

They knelt for 8 minutes and 46 seconds in memory of George Floyd, the Black man killed during an arrest in Minneapolis in May.

Previously, Kulper hadn’t had the opportunity to participate in such protest activity.

The event was organized by members of High School Democrats of Rhode Island. The students hailed from Wheeler, Moses Brown School and South Kingstown High School.

The leader holding the megaphone most of the time was Madeleine McCarthy, a 17-year-old senior at South Kingstown High School, who said she hopes to help organize a larger protest in the near future.

The teens were encouraged by some slightly older representatives of Black Lives Matter RI Pact: Joshua Franco and Corey Jones.

“I want everybody to stand up,” Franco told them. “Not just me.”

“This is not a one-time event,” he told them. “This is a movement.”

Tamar Weil, 16, of Providence, a junior at Wheeler, said she was at the June protest that drew an estimated 10,000 people to the State House.

At one point, she recalled looking at the vast crowd and recognizing the passion of so many people.

Weil expressed some frustration about the difficulty of accomplishing what she called “real change.”

She said she also wishes there was more she could do as a teenager. She can’t vote, she noted.

Declan Allio, 16, said he has found himself thinking about an aspect of the justice system that discomforts him: the labor of prisoners. The labor can be forced, he says.

In cases where Black people are locked up for crimes they didn’t commit, Allio sees parallels with slavery. He suggests his own response to such a situation isn’t sufficient.

Allio reflected that the high school students at the event were white.

“As we protest racial injustice,” he said. “We’re still within those frameworks of white privilege.” 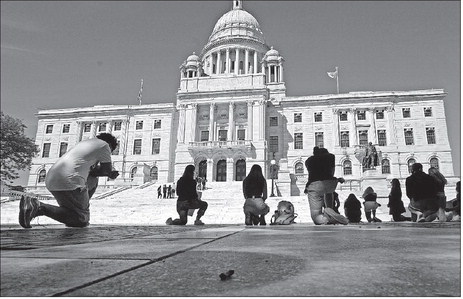